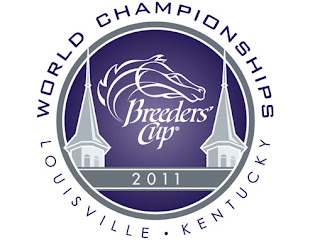 Yes, I'm going to talk betting menus and Breeders' Cup Classic statistics but before I go to far, today is the grand unveiling of Turf: An International Gathering of Horse Racing Bloggers, a group that I am an invited member of. This collection of twenty bloggers, while all individual voices, isn't just a blog aggregate site. In our introductory press release, one of our six founding members, Valerie Grash defined our goal as "...to gather the best the blogosphere had to offer in regards to the coverage of horse racing...where readers can easily find select and thought provoking writing by individuals invested in sharing their love for the sport." Well said Valerie and thank you for inviting me.

My blog, The Turk and the Little Turk, has been a labor of love for three years now. If you don't know me, let me introduce myself and my blog. I am The Turk. Yes I have a name, but don't expect me to use it much here. The Turk moniker was not an uncommon nickname in handicapper circles in the sixties and seventies and I reckon every OTB and backstretch had a "Turk" and a "Greek". Not too long ago I read an obituary of a World War II veteran which he was described as a longtime horse player whose nickname was "The Turk". I feel a kinship with the older generations and I hope I carry on this man's legacy well.

I picked my nickname up in 1986 when a bunch of sailor buddies of mine got sick of hearing me talk about Turkoman, especially after Precisionist smoked him. It was a friendly taunt that I wore as a badge of honor. The Little Turk is my eleven year old son, a Korean-American with an uncanny knack for picking winners out of the horses I inaccurately toss out.

I've been in the game a long time but don't expect breaking news, trainer quotes, insider information or controversial opinions on matters I know little of: I'm a handicapper. I take a red gel pen to Daily Racing Form Past Performances and I apply my derivative techniques to construct exotic vertical and horizontal betting structures from my base handicaps. I build my handicaps in advance of the post parade with each of the horses identified by "layer"; where in the field a particular runner will finish, be it W-P-S, the Exotic 4th, or my toss outs, the Also-Ran's.

I will identify what sort of bet structure I intend to build and often, not always, I'll post the exact bet. I believe in watching the tote board and being prepared to alter your bet structure within the confines of the base handicap, albeit slightly, if opportunity presents itself. After the race I'll break down the race chart and we'll try to learn something in hindsight about why we won or lost.

I have my quirks; I don't read much in advance of the racing, preferring to only study the past performance information, race charts and YOU TUBE race videos to avoid outside bias. I also ignore morning line odds. A good example of why this can be very helpful was this past weekend at Santa Anita in the Grade 1 Yellow Ribbon. Turning Top (Ire), a 5 year old that was 13 of 21 in the money on Turf, a 402 Tomlinson, 3 of 5 in the money on Santa Anita turf but a woeful one of six in the money in 2011, but all Grade 2 with one Grade 1 effort. It was her third effort off of a clearly needed break. In my mind this horse was top six in a nine horse field and she was in my superfecta mix. The bettors didn't see it that way and she was pushed down to the lowest odds on the board. When she hit the wire in fourth she provided the only value in a chalky Superfecta. Her morning line odds? 20-1. She fell to 46-1 before the race began. It's these contrarian thoughts where I find value choices. Bias can influence you in all sort of ways and you'll hear me tell you to block out the bias (including Internet hacks like me) at least until you make your selections.

The Internet is a big place; If we are going to make horse racing relevant again culturally it will be at the grass roots level. The Turk is neither a journalist nor an irreverent or irresponsible writer: I hope you come and visit my blog, share your thoughts, take something away like I have taken away from the handicappers I respect the most. There are lots of places to find interesting voices in racing , be it new media, old media, or a melting pot of both journalists and others crashing the party. The Turk is also a proud member of The Thoroughbred Bloggers Alliance and Raceday 360 as well as a sometimes contributor to various sites such as Hello Race Fans! and the Thorofan Handicappers Corner.

Now that I rambled my gums at you...

The Breeders' Cup is a unique event in American horse racing, especially since getting the Stretch Armstrong treatment and turning into a two day festival. Churchill Downs will be packed with the true believers, horse racing fans who know their stuff. The mostly Grade I level racing will feature cards that read like the who's who of the particular division, multiple graded stakes winners and racing millionaires who suddenly find themselves overlays. I find the best way to handle the excitement of being at the track on big days like this is to be prepared; All races I intend to bet will be base handicapped and I'll have some idea of how I intend to build my bets, along with a budget that I won't exceed. It's a bit too early to start handicapping, but I will do my homework over the next week and put in the preparation for how these races have been unfolding and what sort of odds I should expect.

When I walk into Churchill Downs I'll be prepared with pre-made scratch pads to take the tote board information and layer it over my handicaps, helping me make the final decisions that will define which particular exotic option is best.

The tentative betting menu was released. There are Pick Five's with fifty-cent minimums, ten cent Superfecta's and a Pick Six that will carry over to Saturday if its not hit on Friday. There will be rolling Pick Threes, one Pick Four on Friday that ends with the Distaff or the Ladies Classic and two Pick Fours on Saturday. There is also a Distaff-Classic Double and $1 Super High Five's for both the Distaff and the Classic, with the Distaff High Five payout carrying over to the Classic which will have a mandatory payout.

That's alot to digest but digest it friends and start thinking about what your primary targets will be. I've got a soft spot for the Super High Fives.

I've spent sometime on the front end of my homework looking at some historical information.

What to glean? Only three chalks in past eleven years have won; Chalks have been in the Super High Five nine of eleven years; The bettors second favorites have only hit the board 4 times, only once as high a Show; The average winners odds: $10.12-1.

It's going to be a fun month of preparation. I hope you join me each post.

Wow thanks for the info. I've been riding horses for about 25 years but really know next to nothing about racing.

Glad you enjoyed it Lisa. Racing seems really complicated and dense when you first get involved, but just keep things simple, learn the basics, and go from there. Learn to pick winners, if you can't pick the winner consistently, you might as well send your money to a better charity than a race track. I hope you keep coming back and you can always ask any questions you have, I'd be glad to help. Look for me on Facebook or twitter or send me comments here. Good luck!

Hi! I'm new to your blog; found you on Turf and look forward to reading more of your posts in the future. I hope you will have more thoughts on the Breeder's Cup as it approaches!

Ellen, I'll be all over the Breeders' Cup, except the juvenile races that I just don't care that much about. I'm writing the handicap for the Classic for the THOROFAN's handicappers corner, but beware, my guest handicaps often result in tickets that get ripped, shredded and thrown away. Thank you so much for commenting. Please stay in touch here or at Facebook.