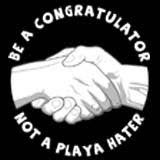 Friends, don't hate the Player! I'm not sure I could have scripted my gambling action on opening day at Keeneland any better than today unfolded. Handicap or Bet Structure? Both really. Simple boxed Superfectas using my base handicaps and being prepared enough to deal with seven scratches in race 7 is the story of the day.

Let's get after this:

I didn't have abundant time to prepare a bet strategy today because as opposed to those folks living down on Wall Street, I'm fully employed and earning my right to be indebted.

I kept it simple; Race 7 had a whopping seven scratches. I took my top four from my base handicap and boxed them and $455 later the strategy was proven adequate. I really thought Blues Street could win and I liked his place on the tote board as the bettors 3rd favorite. As he was my chalk, I was contrarian. In my mind this was a pretty straightforward and rather easy bet to make, but that's hindsight. The handicap was solid and I didn't need to over think it. They don't always break that way. I would have bet the same way even if the scratched horses had run, but the payout would have been better. Sigh.

Race 8 is where I feel my experience kicks in. Speaking of opposing view points I placed Flashpoint no higher than Show in my base handicap. He had been training lights out on the fake plastic for Trainer Ward but was racing on it for the first time. Always demand to see results first, don't bet an underlay that hasn't proven himself on the surface.

Prerace I expressed my intrigue in Hoofit (Nz). Not much on the PP's would point you to a win except a nice last race on the plastic at PID. The bettors had him 6th, I had him at least in Fourth. I took my top five and boxed them and walked off with $1,182.

I'm pretty pleased with the three hours of effort I put into these handicaps. This was a good day, and as a gambler you must understand they won't all be like this.

Have fun friends and thank you for making the launch of Turf so successful.
Posted by The Turk at 7:22 PM