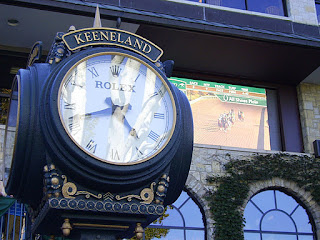 I love the beauty of Keeneland. I love the ebb and flow that Keeneland provides the racing calendar; the start of spring, the end of summer, like bookends on the turf racing season. I love the beauty of the track and the details that seem to pop out when you take time to just look. I'd like to rant about the fake plastic dirt, and I won't lie, I'd rather it was dirt, but it seems to play fair and it does allow for racing and handicapping in the sometimes horrible weather that can accompany these meets, so I'm going to say I don't mind it and have come to be as accepting of it here as I am Arlington, Woodbine and PID. Now Del Mar and Hollywood, don't get me started.

When I went looking for a picture that screamed Keeneland I found a clock, a majestic Rolex clock, taken by a wonderful writer, the talented Michigan Bred Claimer, Joe Nevills, who I thank for its use.

I handicapped a sequence of races that lead to a late Pick Three that finishes with the Grade 1 Alcibiades. i really dislike two year old racing and I just can't seem to get that interested in the Grade 1 affair so out with the Pick 3 and we'll just focus on a very nice Allowance Race on Turf and a Grade 3 sprint on the plastic. Let's get it on!


Twelve horses should enter the gate in a $58,000 allowance, 1 mile on what should be firm turf. I placed Blue's Street on top, but the chalk isn't that heavy. A Grade 2 and Grade 3 winner, recently shifted by Anstu Stables to Eddie Kennelly's barn from the trainer Pletcher. A real dog last time out, Kenneally is a 24% winner with first timers and Blues Street is a talented 7 YO gelded son of Street Cry (Ire): 12 of 12 in the money at the distance, 17 of 27 in the money on Turf, 5 of last 9 in the money. Leparoux is up. I do not believe he will be the bettor's chalk, that honor most likley will go to Yankee Fourtune, so I am looking for an a good price as well.

There is lots to like about Yankee Fourtune and the only thing i don't care for is the long layoff, but McLaughlin hits 32% off this sort of extended rest. MClaughlin places Alan Garcia up, and they combine for 27% winners at KEE over past year in 11 tries. 5 wins in 6 tries on turf, gotta love the will to win, a nice contract to Bim Bam who we'll get too.

Not much separating my next layer, Moryba (Brz) and Bim Bam. Morya (Brz), trained by Bill Mott, is a fairly consistent runner cutting back in distance. 9 of 15 in the money on turf and competitive in his Grade 2 races this year.

I have Hollinger next but Mikoshi is better overall; Mikoshi is a 5 year old Orientate horse trained by Matz with Go Go Gomez up. Winless in two tries at KEE, 1 win in six starts at distance, but 15 of 20 in the money turf. Last time out at Woodbine he laid an egg. His post and his last effort will have to be reversed but tough spot.

Hollinger has two Show finishes in last 7 races, never won at the distance and only 1 turf win in 5 tries. Trainer Attfield is pretty sharp and would not be surprised if he scratches out of here.

Cherokee Artist has Johnny V up for Trainer Motion. I'm actually going to flip flop him and Hollinger in my base handicap. No wins in 5 tries at the distance, 1 win in 10 tries on turf, winless at KEE and 1 win in last 13.

I'll build a superfecta out of this, matrixed as I won't cover any of the exotic picks in the win spot.

In the Grade 3 Phoenix, I think Aikenite is a deserving chalk and I expect he will be the chalk at post time. 3 of 4 in the money at KEE with 2 wins. Pletcher and Johnny Velazquez win 41% of KEE starts and 29% overall in past year on a whopping 705 starts together.

Sterling Outlook has been claimed twice in past six months and last out gamely dead heated a win at 6 furlongs at Del Mar with a 101 BSF. Trainer Saddler places Gomez up and the two win 235 of the time together. 2 wins on fake dirt in 9 tries. Feast or famine I reckon.

Hamazing Destiny is very reliable and honest. Trainer Lucas is looking for a graded stakes win, with an unthinkable zero for 69 streak in the rolling year. 5 of 10 in the money at the distance.

Flashpoint is training very fast on the fake stuff, banging out :59 and change 5f workouts at KEE. First time racing on plastic so how the Pomeroy son performs, who knows. Could get bet down to the chalk and maybe the bettors are right but I'm not there yet. He's very good though so we'll cover the top spot with him. Trainer Ward very respected here at The Turk and Little Turk.

Only other horse I'm covering is a bit of value, Hoofit (Nz) . I'm not sure what to expect but he ran well at PID in September.

The Turk has never been very successful at Keeneland, especially the poly races. I'll be playing quite a few early to get a feel for it and we'll see if we can't do a bit better here.

Have fun friends, Turk Out!

There are so many people and organizations that need our help, I know that, but if possible, please help the family of one of our own, a horse racing fan who oozed passion for this sport and who is dearly missed by his friends and family.

Thank You friends. Turk Out!
Posted by The Turk at 9:56 PM