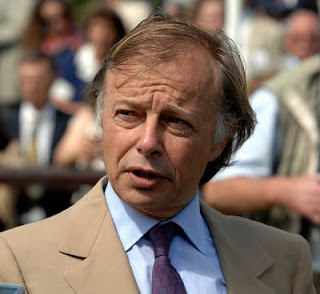 Is there another figure more synonymous with the Breeders' Cup Mile than Freddie Head? Five times this man stood in the winner's circle, twice as a jockey aboard Miesque and then the last three years as trainer of Goldikova, a mare requiring no introduction in the racing world.

The pre entries are in and the advanced past performances are available for next weekend two day Breeders' Cup World Championships. Where do you start? Well, that's a personal decision, but for me, I start at the betting menu. There are 15 Breeders' Cup races, 10 of which are Grade I events, as well as five juvenile races. That's quite a bit of handicapping to do. Then there is the weather wildcard. Will it rain, will the track be sealed, sloppy or fast? Will the turf be yielding, American style fast, or a bit soft like our Euro cousins like? Some of these questions you just can't answer one week out but what you can do is prepare.

Preparation for the Ol' Turk means identifying which races I intend to handicap, setting my betting budget, and coming up with a betting strategy. It also means doing some mundane things like getting my bet preparation worksheets together. I know that I don't process the tote board information by sight, I have to write it down 25 minutes to post and counting down to 8 minutes. I watch the trending as I jot down onto my pre printed worksheets the odds off the tote and I also have my pre printed slots where I write out my bets and what I expect the bet to cost. This may sound wildly anal, and most likely it is, but I take positive ROI seriously and this is my personal system of preparing my bets. I didn't mention handicapping; that's all done well in advance of planning the bets. I have my base handicap and I seldom stray from it, as the "think long, think wrong" axiom has proven true too many times in my history. I do my homework in the quiet of my kitchen and away from the bustle of the track and when I get to the track I can focus on the post parade and the tote board and not concern myself at all with handicapping.

My betting targets almost any time of the year involves Pick Three and Pick Fours; That said, I don't particularly like juvenile races, and the Juvenile Fillies on Friday and The Juvenile on Saturday are plum in the middle of Pick Fours. Another consideration in Breeders 'Cup races are the field sizes; I may need to go six deep to hit the Superfecta and the bets will be more expensive than I'd prefer. These two thoughts combined together make my decision easy; I'm skipping the horizontal bets next week and I'm going to stick to vertical targets, the Trifecta/Superfecta and the grand daddy of vertical betting, The Super High Five.

The Super High Five; There may only be one thing I daydream more about. It wasn't always this way. Earlier this year it wasn't even on my radar, that is until my Preakness post race analysis when I realized I had it cold. The bet paid almost $50,000, and I didn't place the bet. Ugh. I got some redemption on Arlington Millions Day when I won my first Super High Five Bet, and hitting it on Breeders' Cup weekend would be an accomplishment that I would treasure in my bettors resume.

The Super High Five is being offered for The Distaff (Ladies Classic)and the Classic.

My handicapping will be directed at the following;

The Mile Grade 1 has thirteen pre-entrants and we'll study them all understanding some may not be in the starting gate next Saturday.

3 wins in four ties at the distance and 7 wins in 14 starts over grass, 10 of 14 in the money. Winless in last two Grade 1 efforts, comes here off Grade 2 Qutar Prix Dollar.


Compliance Officer is trained by Bruce Brown for owner Thomas La Marca. The NY Bred 5 Year Old gelded son of Officer is 15 of 20 in the money on turf, 1 win in three starts at the turf mile, and has a career $409,000 earnings. Compliance Officer was claimed in May 2011 and has five straight wins but no graded stakes action.

Goldikova won't be mistaken for a NY State Bred. That said, he's a fine horse but this is a big step up.

Courageous Cat is the five year old son of Storm Cat, trained by Bill Mott. The chalk his last time out in the Woodbine Mile, nipped at the wire by Tullare the colt who's also entered here.

What does Court Vision need to do to be retired? The Dale Roman's trained horse has had a rough 2011 and has only one win in last ten starts, the 2010 Woodbine Mile.

2 wins in 7 starts at the distance, winless in 4 tries at CD with a place and a show, including yielding turf Place by a neck in 2010 Turf Classic, losing to General Quarters.

I think it would take a reversal of fortune to see this old warrior in the top four.

Get Stormy is the 5 year old son of Stormy Atlantic and trained by Thomas Bush. The Shadwell Turf Mile at Keeneland includes Sidney's Candy and Gio Ponti.

Here's the Baruch (G2) at SAR in August with Turallure over turf rated good. It's an extra furlong and the cut back may be good for him.

Just for fun, not much for homework purposes....

Jeranimo is the five year old son of Congaree. He's coming in for trainer Michael Bender(18% winner on 73 starts) off his career best Beyer in the Oak Tree Mile (G2) where he beat Mr. Commons, a race that I cannot find embeddable video for.

He never fired in his next start, The Inglewood (G3), but came out of that and a well beaten Place in the G1 Eddie Read at 9 panels. Acclimation ran quite a race and Caracortado hasn't been impressive in this series but I digress.

Out of the Eddie Read, a dismal Pacific Classic (G1)and then the Oak Tree Mile. He's in much deeper waters here with his career $660,000 and six career wins in 22starts.

Mr. Commons would be oddly placed here if he starts; the 3 year old colt biggest win was a in a restricted stakes race, the Oceanside $112K. Was the beaten chalk to Jeranimo in the Oak Tree Mile. 4 of 4 in the money over turf with 2 wins, 1 win in 3 starts at the distance, 6 of 7 in the money in 2011. Started in the Preakness but didn't fire and also started Santa Anita Derby.

Sidney's Candy will be making his sixth start of 2011 and his fourth with Trainer Pletcher. His last race was the previously discussed Shadwell Turf Mile. Before that was a dud of a 7F race, the Forego, over dirt (great move...wished I was smart).

No wins in 3 starts at the distance over turf. 2 turf wins in 5 starts. He set the pace in last year's Breeders' Cup Mile before fading. Mixed feelings, liked him more in Sadler's barn, seems like he wasn't managed very dynamically for WinStar.

Strong Suit is trained by Richard Hannon for Qatar Bloodstock Ltd. The three year old son of Rahy campaigns in Europe and comes in off two Grade 2 wins at 7 furlongs, a straight and a right hander, over good turf. Three wins in last four. No left turn courses so far and only one try at 8 panels, the Grade 1 Prix Jean Prat, a show finish.

8 of 9 in the money over turf but winless at the distance and only one try. Are American turf runners that disrespected that its worth the airfare to send Strong Suit over? Well, respect is earned on the track.

Turallure has shown up in many videos here, impressive in almost all. Along with Get Stormy and Goldikova, only wins in the field at Churchill Downs. Training sharply at Keeneland. The 4 year old son of Wando has shown a very wicked late turn of foot for trainer Charles Lopresti. 2 wins at the distance in three starts and 9 of 11 in the money over grass.

And finally, Zoffany (Ire), Aidan O'Brien's 3 year old Dansili colt. No wins in three starts at the distance, with 2 Places. 9 of 12 in the money over turf with 5 wins. Never in contention was the running line in the Shadwell Turf Mile. His last euro effort, Prix Maurice de Gheest (G1) in August at 6.5 furlongs he was trounced. Last win was in August 2010, G1 Phoenix Stakes at six panels.

His claim to fame was staying close to Frankel in the St. James Stakes (G1) in June.

My inital thoughts are:

You might want to watch a replay of the Lennox and the Burj Khalifa Challenge Stake before you so easily dismiss Strong Suit. Gio Ponti and Courageous Cat have both been beaten by Goldikova, what upside can they possibly have? A hope that Goldikova runs into traffic problems? They certainly aren't going to run career highs next week. Strong Suit on the other hand might be twice their price and has a very good chance to progress further as he is just a 3-year old. Turallure also looks like a late developer and might have another move forward here.

Tom, Thanks for reading and commenting; I've written nobody off at this point. I will be looking for value and Strong Suit does represent >10-1 with a chance. Ultimately some one will have to get tossed out of my selections and it's only one idiot handicapper/bloggers opinion, so take no offense to it. Visit again! Turk