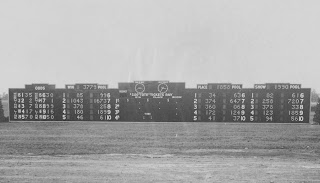 The old Keeneland Tote Board; Be it new, old, analog, digital or scratched out in chalk, it doesn't matter, but as a horse player it pays to pay attention to it before and after the races.

I've taken a few different views of the races, broken down by Turf and Poly. I'm less interested in handicapping analysis and more focus is on what financial returns are being generated, specifically for the Superfecta, and what the ranking on the tote board was the top four finishers.

Let's get after it starting with Poly:

13 of the first 14 poly races had the Chalk finish in the top 4; Two of the three biggest Super payouts were keyed by the Chalk; The Winner with the lowest odds keyed the biggest Superfecta. The Average field size on POLY was 9.71 Starters.

Of the 14 winners, 5 pressed the pace, 4 took a stalking trip and 5 closed like freight trains.

And now the Turf:

Six races on Turf, all raced on Firm turf. 4 Chalks made the Superfecta with 2 Chalk winners. The Average number of starters was 9.83 and Post 1 was 0 of 6 wins and only 1 of 6 in in Superfecta.

4 of the 6 races had 3 of the top 4 from the tote board rankings in the Superfecta with the average payout $760.

The sample size isn't large but what I glean is that chalk generally finishes in the top four and of the first 20 races, 12 of 20 had at least 3 of the top 4 from the tote board rankings in the Superfecta.

Learn to keep your own data, data that helps you with either your handicapping or your bet structuring. I could think of many more data points I'd like to track, many of them based on handicapping. The most key item for me to research is how the morning line favorite and the Tote board Favorite lined up with The Ol' Turk's Chalk.

I'd be remiss to not say that I am a big fan of Steve Byk and his At The Races show on XM Sirius Radio. Steve has a wonderful format and he gets some fantastic recurring guests as well as all the major players in the sport. Steve is one hell of a horse player and I respect him as a handicapper very much. Steve's also a very passionate guy and I finally got around to listening to Steve talk about Tim "Tiznow" Reynolds; Steve tastefully talked about the online horse racing community on Facebook which I am a minor member of, but Tim was almost the lynch pin of online horse racing fans, the catalyst that got many a good discussions going. I know almost two weeks after his death I miss his comments dearly. If you are interested you'll find Steve talking about Tim abround 5 minutes into the first hour at this link.

Life goes on for the living but Tim's memory will live on for a very long time.

Have fun friends with your handicapping; I have the Grade 1 Spinster lined up for tomrrow.

Hi Turk...I've just started reading your blog, and I guess you could say I've got Tim Reynolds to thank for that. I too listen to Byk every day and as I told him in an email recently, I'm a much worse employee because of his show! Anyway, heard him mention Tim and now I've read a bit about
Tim on the internet. What a terrible shame. I don't know any of the details, and although I'm curious it is irrelevant. Unfathomable to me what his parents must be going through having lost not one but two sons. And then to think of his wife and daughter...and the ripple continues. While I will never get to meet Tim, reading about the online community that became so close both while he was living and now after his death is something I find both heartwrenching and heartwarming. Anyway I just wanted to ramble about that a bit and tell you I'm really enjoying reading your blog and learning some more detailed handicapping information. More another time...I'm off to the races tomorrow in my hometown of Lexington! The weather will be a bit crappy but the time spent at the track will be sheer delight.

Thank you for writing; Please come back and feel free to write me here or at Facebook. Tim left a legacy of friendship across the horse racing world and I think we'll be talking about our "Tim Moments" for years to come. Thanks again- Turk