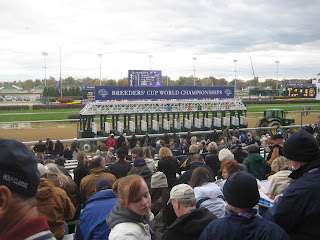 The 'Ol Turk will be handicapping and hunting for exotic payout Nirvana at the Breeders' Cup, and Handicappers Homework before the Past Performances are printed and red ink is applied to them aids the process.

It goes without saying, the Europeans add a real layer of complexity to the handicapping. Speaking as a bettor, I think it helps that there is a real visceral feeling out there that the Europeans on turf are vastly superior. Maybe they are, and let the big money flow to them, it will be our job with the homework to know as much as we can about them so we can determine which North American runner has a chance, as an overlay, of taking down the house.

Nathaniel, trained by John Gosden in the King George and Queen E Stakes. Caution, poor Rewilding is seen breaking down. If you have a moment, read the comments of Trainer John Gosden, one of the Turk's favorite conditioners. I admire this man greatly.

Sea Moon is trained by Sir Michael Stout. The colt would be coming in off a Show finish in the St. Leger.

I've found some comments related to Sea Moon's stamina, which Trainer Stoute seems to dismiss and the connections intentions for the Breeders' Cup seem to be firmed up as well.

St Nicholas Abby is trained by Aidan O'Brien. The Montjeu colt was fifth in the Arc. Don't look for the filly Danedream in Louisville but Treasure Beach we'll get too.

All this does is state the obvious, that with defections, we may see some horses in the Turf that will be looking at the race as chalk free and opportunity city. We have to keep in mind that not every European sent here is top tier.

Aidan O'Brien's other expected starter is Treasure Beach who is starting in Woodbine on October 16th. Some pretty darn good horses, including possible turf starter Dean's Kitten, went into the gate on Arlington Millions Day and here is Treasure Beach taking the Secretariat Stakes

And another strong Treasure Beach effort, the Irish Derby.

Winchester would be coming in off a horrid Joe Hirsch, but Belmont that day was a bog with no real turf pace. Look for Dean's Kitten again. Don't worry handicapping poor Cape Blanco, that fine horse was retired after this effort because of injury.

Winchester was much stronger in the Sword Dancer. Look for Teak's North as well, another possible Turf starter.

And the United Nations, Teak's North punches his ticket for the Turf.

And speaking of punching tickets, Celtic New Year earned a trip to the Turf with a win in Del Mar, in the Del Mar Handicap. A great trip but really gutty holding off Bourbon Bay.

What I've taken away from this is so far I see no real favorite and I'm sure the next week will be interesting, as some folks out there who didn't consider this race may not start to look at this as the wide open affair it is shaping up to be and may take a swing at it. Building a Superfecta out of this may be really challenging but we could be looking at a five figure Super so its worth the try.

Have fun friends, Turk Out!
Posted by The Turk at 7:10 PM